SABR has the following meanings:

Patience: the capacity to endure hardship, difficulty, or inconvenience with calmness, self-control and without complaint

Forbearance: Tolerance and restraint in the face of provocation

Composure: A calm or tranquil state of mind

Equanimity: The quality of being calm and even-tempered

Steadfastness: Quality of being, firmly loyal, unswerving and unchanging

Perseverance: Steady persistence in adhering to a course of action, a belief, or a purpose

Endurance: The act, quality, or power of withstanding hardship or stress

In the Quran, SABR has been used in all the above meanings at different places as well as in the following meanings:

– To maintain patience, composure, equanimity, self-control and endurance in the face of difficulties, hardships, stress or inconveniences that may come in living and doing things in the way Prescribed by Allah

– To maintain determination, resoluteness, steadfastness and perseverance in abiding by Allah’s commands

– To steadily adhere to the statutes of the Quran

– To maintain constancy with Allah

Allah says in the Quran:

-O you who believe ! Be steadfast and be supreme in your perseverance [3:200]

-Allah does not impose on any self any more burden that it can bear [2:286]

When to show SABR?

– In case of loss of money

– In case of loss of lives

– In case of loss of fruits [of your toil] [show patience, endurance, equanimity and adherence to the Laws of Allah][2:155]

– On whatever may befall [of calamities] [show patience, endurance, equanimity and adherence to the Laws of Allah] [22:35]

– In the face of rejection [show patience and endurance][6:34]

– When people make you a laughing stock for your True convictions [show equanimity and composure] [23:110-111]

– In seeking your Lord’s Countenance [show steadfastness and perseverance][13:22]

– When wealth, fortune, plenty or ease comes after poverty, misfortune, scarcity, or hardship [show equanimity and adherence to Allah’s laws][11:9-10]

– While waiting for Allah’s judgment [and results of your actions] [show patience, calm and tranquility of mind] [7:87]

What are the Rewards for SABR?

– Double reward (as a result of SABR, repelling evil with good and spending in the cause of Allah ) [28:54]

– Goodly residence in this world and much better reward in the hereafter [16:41-42]

– No harm from the disbeliever enemy (as a result of TAQWA and SABR) [If SABR [steadfastness] is combined withTAQWA [Careful observance of duties assigned by Allah and the Commanders of the government established in the name of Allah and a sound protection against the enemy], the enemy cannot do any harm ] [3:120] 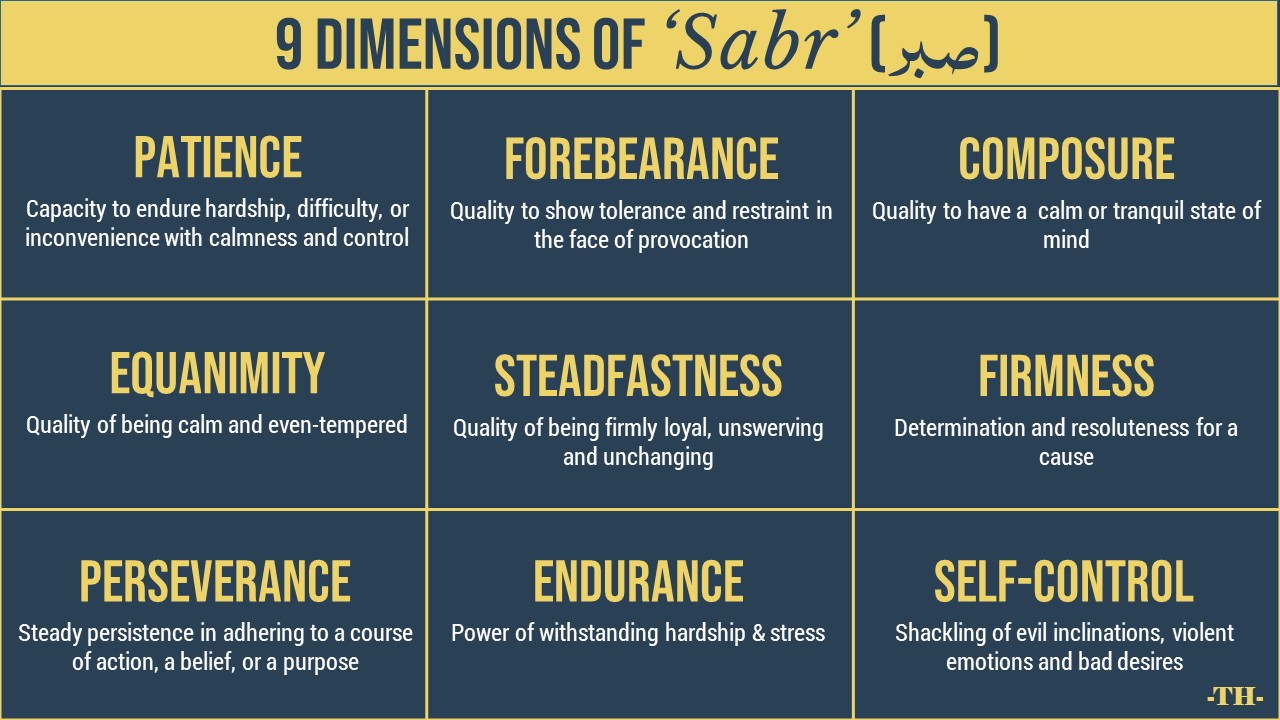